ALOA thanks members for their input – we have influenced important legislation

Re: Thank you for your input – we have influenced important legislation 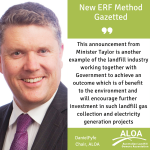 Given the recent announcement from the Energy and Emissions Reduction Minister, Mr Angus Taylor, I would like to thank the members of our Association who assisted in providing feedback to the Department, resulting in the Minister’s announcement.

“This announcement from Minister Taylor is another example of the landfill industry working together with Government to achieve an outcome which is of benefit to the environment and will encourage further investment in such landfill gas collection and electricity generation projects.”

Mr Fyfe went on to say,

“Our CEO has been able to harness the views of the Association members and influence the outcome of a very important piece of Government legislation.”

The new method was developed by the Government, after it received conflicting advice on whether the revenue from the sale of electricity and renewable energy certificates meant these projects didn’t need the extra support of carbon credits.

In 2018, the government’s Emissions Reduction Advisory Committee (ERAC) concluded that the right to earn carbon credits from landfill gas generation shouldn’t be extended beyond the initial seven years, because these projects didn’t need credits to be profitable.

However, it reviewed that decision after receiving new information in April last year.

If we can be of any assistance to our Members on any issues involving Government legislation, please contact the undersigned.